A painting about Sicily 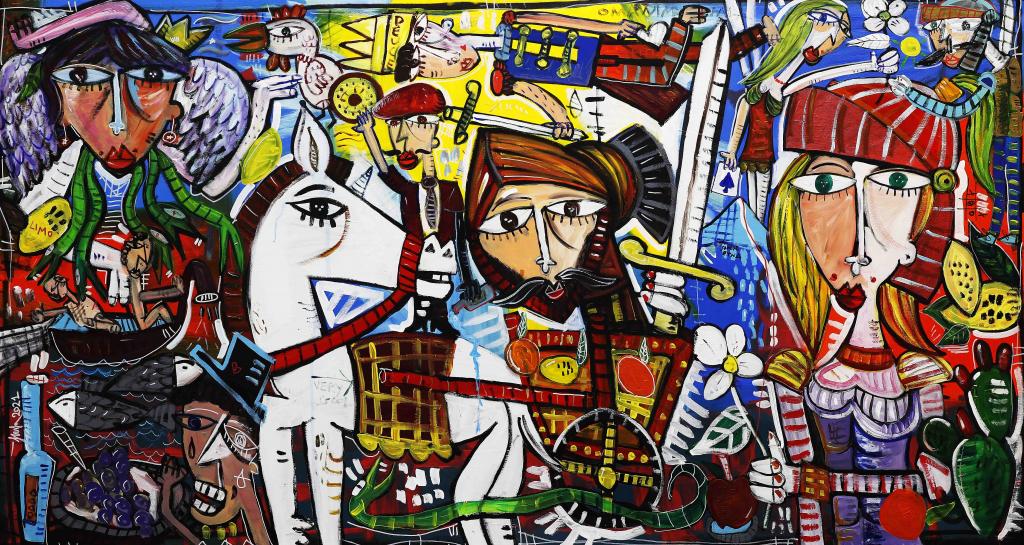 A painting about Sicily

By his love for the Sicilian land and its traditions the artist Alessandro Siviglia was inspired to create this beautiful work “Sangre dell’Etna” in 2021. It is painted on a 100×200 cm large canvas with a mixed technique of oil and acrylic colors.

The painting presents in the background the typical Sicilian landscape with the colors of the sunlit sky and the sea, which at times is tinged with red to symbolize the hard work of the island’s fishermen on board the characteristic Lampara and, at the same time, celebrate winemaking, as a fundamental and traditional production activity of the Territory.

The still very active vulcano Etna also appears, expertly painted with the same shades of the sky to underline all its majesty, and a prickly pear shovel, another peculiar symbol of Sicily and a very important part of its economy.

Whereas tt the center of the work, with bright colors that recall nature, are represented all the symbols and characters of the Sicilian Tradition. 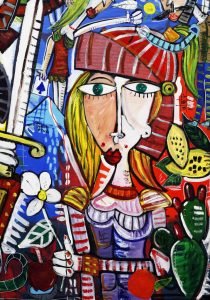 We can see Angelica, the main female character of the famous knights tale “Orlando in Love” by Matteo Maria Boiardo and the following romance “Orlando Furioso” by Ludovico Ariosto. Its history is linked to that of the paladins of France in the Sicilian Puppet Opera, a real Marionette Theater with beautifully decorated and colorful handmade wooden puppets that are still represented today in the theaters of the island and are part of the precious Sicilian tradition and the Italian cultural heritage.

In the very center of the painting there is a Pupo represented on board of the famous Sicilian cart, pulled by a white horse. The cart was a colorful means of transporting goods, used throughout the Sicilian territory from the nineteenth century to the second half of the twentieth century and today it is one of six symbols of Sicilian folkloric iconography. 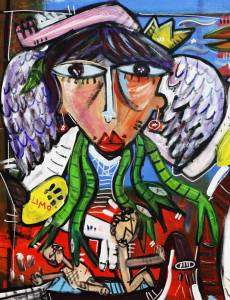 Then we find the Trinacria, represented with the head of the Gorgon, whose hair is made up of snakes that intertwine with each other. This icon has become the undisputed symbol of Sicily and of “Sicilianity”, to the point of heading to the center of the official Flag of the Region. An ancient legend, connecting to the geographic shape of the island and its three points, tells that it was born from the dance of three beautiful nymphs. For this the Trinacria is represented with three legs coming out directly from the head.

In the artwork there are several more ladies and knights, men who wear the unmistakable Coppola and typical products of the Land of Sicily such as citrus fruits.

The painting, given the great variety and vividness of the colors and the deep symbolic meaning covered by each of the characters interacting, will certainly be a very welcome gift for anyone who feels an emotional bond with Sicily and it’s distinctive culture and traditions.

Due to the large size it suits best in spacious professional environments such as reception halls, open space offices or in a travel agency for example. Of course it is also nice at home in a large living room donating a touch of color and a very modern vision of the culture of an entire people.

What you can read next 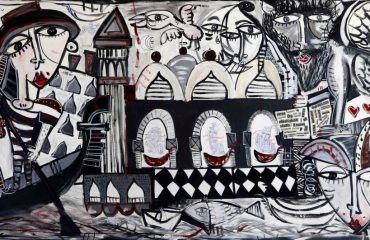 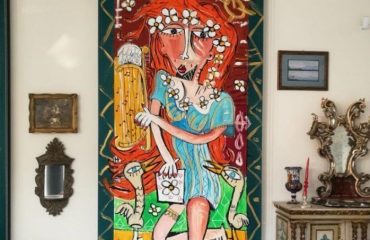 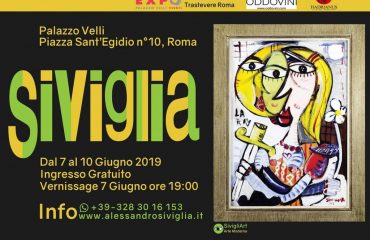 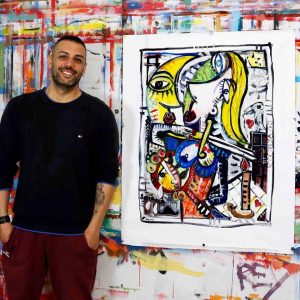 © 2022 Sivigliart.com | All rights reserved.
TOP
We use cookies on our website to give you the most relevant experience by remembering your preferences and repeat visits. By clicking “Accept All”, you consent to the use of ALL the cookies. However, you may visit "Cookie Settings" to provide a controlled consent.
Cookie SettingsAccept All
Manage consent

This website uses cookies to improve your experience while you navigate through the website. Out of these, the cookies that are categorized as necessary are stored on your browser as they are essential for the working of basic functionalities of the website. We also use third-party cookies that help us analyze and understand how you use this website. These cookies will be stored in your browser only with your consent. You also have the option to opt-out of these cookies. But opting out of some of these cookies may affect your browsing experience.
Necessary Always Enabled
Necessary cookies are absolutely essential for the website to function properly. These cookies ensure basic functionalities and security features of the website, anonymously.
Functional
Functional cookies help to perform certain functionalities like sharing the content of the website on social media platforms, collect feedbacks, and other third-party features.
Performance
Performance cookies are used to understand and analyze the key performance indexes of the website which helps in delivering a better user experience for the visitors.
Analytics
Analytical cookies are used to understand how visitors interact with the website. These cookies help provide information on metrics the number of visitors, bounce rate, traffic source, etc.
Advertisement
Advertisement cookies are used to provide visitors with relevant ads and marketing campaigns. These cookies track visitors across websites and collect information to provide customized ads.
Others
Other uncategorized cookies are those that are being analyzed and have not been classified into a category as yet.
SAVE & ACCEPT